A few words about Skyros

The island is placed 24 nautical miles from Kymi in Euboea and 118 n.m. from Piraeus. It is the largest of the Sporades islands.( 215 sq.km.) .The main port is Linaria.

The town of Skyros chambers up a hill in a white half circle. On its top stood an ancient acropolis, one of the best strongholds in Aegean sea. In Byzantine times it turned into a fortress. There are remains of Byzantine and chiefly Venetian fortifications to be seen today on the site. Under the castle is the monastery of Saint George founded in 962 and dominating the whole island . 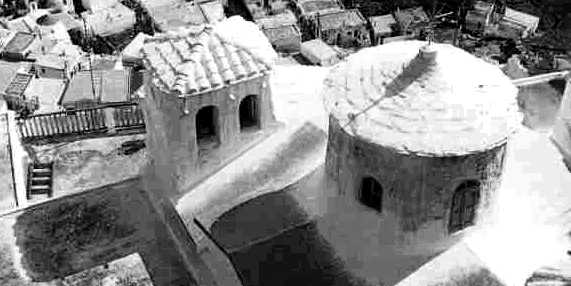 The first inhabitants of the island were called the Kares, Pelasyi or Dolopes . This is why the island was first called Pelasyia or Dolopia. As proven by the excavations at Palamari, Skyros was a trade centre in the Copper Age (2500-1800 BC). In 470 B.C. the Athenian general Kimon expelled the Dolopes and distributed the land among the Athenians who set up a large colony. In 322 BC the Macedonians took Skyros .The Island restored to Athenians in 196 BC. In Byzantine times Skyros was a place of exile. At the end of the 14th century it was occupied by the Turks but a little later handed back to Byzantium. After the capture of Constantinople by the Turks in 1453 it surrendered to the Venetians and became a colony of Venice. The island next occupied by the Ottomans in 1538. 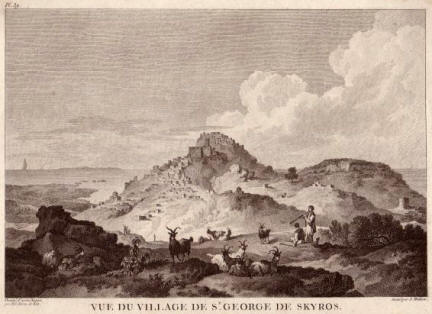 Skyros was liberated in 1830 and became part of Greece.

Skyros features significantly too in Greek mythology. According to Homer’s Iliad there was on the ancient acropolis that Thetis hid her son Achilles, where, dressed as a girl, he was brought up as one of the king Lycomides’ daughters in order to escape the Trojan War and the prophesy that he would be killed there. Achilles fell in love with one of the King’s daughters, Diidamia and they had a son called Neoptolemo. Prophet Kalhas revealed to the Greeks that Troy could never be conquered without Achilles. Ulysses went in Skyros to look for him and disguising as a merchant, with weapons hiding inside his merchandise, he managed to get inside Lykomedes’ court. While the girls started looking at the women’s clothes that Ulysses was selling, Achilles went for the weapons. This way Ulysses found and led him to Troy where he was killed by an arrow in the heel.

Their ships departed from a small port which is called Achilli and is located close to the Aspous bay.
Ulysses returned to Skyros, this time to look for Achilles’ son and take him to Troy. Neoptolemos invaded Troy, hiding inside the Trojan Horse and killed the king of Troy, Priamos, to get revenge for the death of his father, Achilles.

Theseus is also supposed to met his death here.

We use cookies to ensure that we give you the best experience on our website. If you continue to use this site we will assume that you are happy with it.Ok